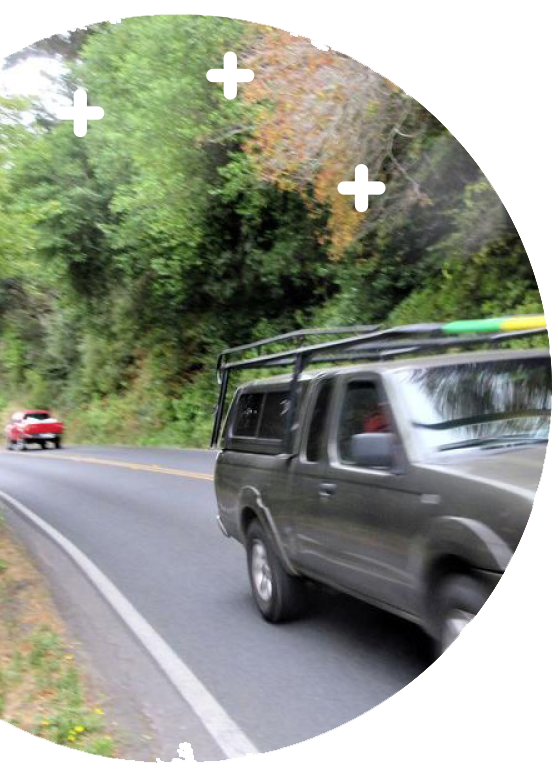 What is Upgrade the Drake?
Upgrade the Drake is a County of Marin project which will rehabilitate 2.2 miles of Sir Francis Drake Boulevard between Highway 101 and the Ross town limit, an 18-month project that will include many safety enhancements. Sir Francis Drake Boulevard is a major east-west corridor located in Marin County, and connects community members to key destinations and activity centers. Construction began in June 2020 and, dependent upon weather and other potential delays, is anticipated to be completed by December 2021.

What are the project construction costs? How is this project being funded?
Upgrade the Drake is estimated to cost a total of approximately $18 million. The Transportation Authority of Marin (TAM) allocated $14.5 million for the project from its Major Roads Project Fund. Those funds come from the Measure A transportation sales tax, which passed in 2004. Marin County staff secured approximately $3,465,000 from other stakeholders including the County Service Area 17 (Kentfield-Greenbrae-Larkspur), the Marin County Street Light Fund, and various grants. The Marin Municipal Water District agreed to reimburse the County for the base bid amount of $3 million for replacement of their pipeline as well all other associated costs.

How can I stay updated about the project and construction activities that may impact me?
The project team will be updating this website on a weekly basis with traffic and construction updates. You can also sign up to receive e-mail updates here or call the project hotline with any questions (415-688-7613). Project team members will respond to all inquiries within 24-hours.

The following definitions are provided to differentiate between “Street lights” and “Traffic Signals”:
Street lights are poles that hold lighting devices to illuminate roadways, intersections and pathways.
Traffic signals are poles with attached signaling devices positioned at road intersections, pedestrian crossings, and other locations which control the flow of traffic.

Why was lighting a safety concern for Sir Francis Drake Boulevard?
Sir Francis Drake Boulevard through the project zone has been a historically low-light corridor, and improving visibility for all users was discussed in regards to sidewalk path widening. Improving lighting will significantly lower the risk of vehicular collisions, and provide for a safer experience for pedestrians using the walkway on the north side of the road. Collision data collected over years, including collisions at night and those involving vulnerable road users, were used to help define the safety needs for this project.

How was the design of the initial lighting system determined?
The County of Marin worked with street lighting consultants to help define the required height, location and spacing to meet safety standards for lighting. The consultant analyzed the existing lighting conditions in the project area and compared potential improvements within the project to industry lighting standards along a roadway of this type which were summarized in a Lighting Assessment Memorandum.

Among the roadway characteristics factored in the lighting design were the permitted speed limit of 35 miles per hour, the average daily traffic, and the multiple user groups within the community, including students, residents, shopping center patrons, multi-use path users and public transportation. The average daily traffic of Sir Francis Drake Boulevard ranges significantly, going from 46,000 vehicles per day near the Bon Air Center to 22,000 vehicles per day at the Ross Town limit. The lighting guidance for safety needs provided location and brightness recommendations throughout the several distinct regions of the 2.2 mile corridor, applying needs-based lighting solutions for each section.

Was this lighting system included in the EIR?
The project scope at the time of Final EIR certification and project approval did not include modifications to the street light system. During the final detailed design of the project, it became clear that an enhanced street lighting system would further improve safety for all modes of transportation.

What happened with the initial streetlighting upgrades that were turned on in February 2021?
The new streetlighting on Sir Francis Drake Boulevard, which was installed along the median from El Portal to Eliseo Drive, was turned on the night of February 3, 2021. This was the first time the new median lights were illuminated and the resulting lighting effect was not as intended. The County of Marin recognized the undesirable effect of this lighting and would like to apologize for the inconvenience. For an immediate short-term fix, this new streetlighting along the median near the Bon Air Center will be turned off until a long-term lighting solution can be found. County staff are working to find a long-term solution that maintains the safety goals of the corridor while reducing concerns raised by residents along the corridor. Previously installed new lighting at the intersections will remain active for safety reasons. Future potential solutions will be shared with the community as they are developed.

Who is the new lighting consultant?
The County selected the consulting firm, Fehr & Peers, who recently completed a community-driven lighting project in Marin County, working hand-in-hand with community leaders, stakeholders, and the County, to provide a context-sensitive solution resulting from a thorough community engagement process.

Will quality of light be considered?
The appearance of the light as measured in color temperature (measured in degrees of Kelvin) will be reviewed along with the pattern of light dispersal from the fixture heads. The height, size, and spacing of the streetlight poles will be among other lighting system components reviewed with the lighting assessment.

Is there more or less traffic at night? How does this impact lighting along Sir Francis Drake Boulevard?
Although there is less motorized traffic at night, studies have shown that up to 50% of collisions involving fatalities occur at night. The nighttime fatal accident rate on unlighted roadways is about three times the daytime rate. Lack of, or insufficient, roadway lighting is a significant factor contributing to vehicular collisions at night.

Do the paths along Sir Francis Drake Boulevard stay lit at night?
Lighting levels for paths will be further analyzed based on surveys of the number of pedestrians using walkways during the first hour of darkness. When the days are shorter in the months of December and January, there are more pedestrians on the paths at dawn and dusk.

What’s the cost going to be? Can the light poles be repurposed?
Over 75% of the cost of the lighting is for underground lighting infrastructure that will remain in place including foundations and wiring. If poles are replaced, it is anticipated that they can be returned and/or reused since they are standard poles. Additional cost for changes will be determined when alternatives are identified.

The following definitions are provided to differentiate between “Street lights” and “Traffic Signals”:
Street lights are poles that hold lighting devices to illuminate roadways, intersections and pathways.
Traffic signals are poles with attached signaling devices positioned at road intersections, pedestrian crossings, and other locations which control the flow of traffic.


1. The new traffic signal poles where designed based on the 2018 Caltrans Standards which are the relevant standards for cities and counties in California. The new standards are based on a 100MPH wind speed as opposed to 80MPH. Going forward these larger and stronger poles will become more common place across the state as the older equipment is replaced.

4. The new poles are designed to accommodate changes to attached equipment (more heads, additional signs, etc.) so that minor adjustments of signal equipment attached to the mast arms would not require a brand-new signal pole in the near future. This is a long term cost savings improvement.

What is planned for the fountain/statue at La Cuesta?
The intersection reconfiguration will be completed in March 2021, but it will be a several more months before all the architectural elements and landscaping will be installed and completed. Recognizing that the La Cuesta intersection serves as the historic entry point to the community, the existing statue will be preserved (now in safekeeping) and architectural elements of the new median will be consistent with the existing fountain theme (e.g. circular center, stair steps, decorative masonry). The cherub statue was center piece of the fountain and although it is being preserved and reset in the median, there are no plans for a water feature in the median for the future.

What kind of plants are going to be planted in medians along the corridor?
A variety of plants and trees will be used as part of the Upgrade the Drake’s landscaping plan. These range from formal style plantings to naturalistic garden style. For more details, please see the Planting Palette.

Why are slip lanes being removed as part of the Upgrade the Drake project’s safety improvements?
Traffic and pedestrian safety standards are constantly changing and improving based on data and research. Over 40 years ago, slip lanes were installed at intersections on Sir Francis Drake Boulevard (SFD) in accordance with the standards of the time. However, modern design practice has moved away from slip lanes, and the associated “pork chop” pedestrian islands, for roadways such as SFD. The slip lanes were removed from SFD for the following reasons:


• Typically slip lanes do not have a dedicated pedestrian signal (with countdown) or a traffic signal requiring motorist to come to a stop prior to the pedestrians crossing.

• Pedestrians cross slip lanes to “pork chop” islands which have limited space for pedestrians. This limited space is particularly problematic at the Laurel Grove intersection of SFD with high pedestrian traffic near the schools, as shown in the photo.

• Slip lanes are a “double crossing” where pedestrians are in the roadway (exposed to vehicular traffic) for a longer duration. Eliminating slip lanes by bulbing out the curbs shortens the overall distance that pedestrians walk in the roadway.

• Vehicles tend to drive too fast through slip lanes. It is important for pedestrian safety that vehicles slow down when turning at intersections, particularly on to residential streets such as La Cuesta and Laurel Grove Avenue.

Why is the metal guard rail being replaced by post and cable fencing?
In the late 1960s, the County installed metal guardrails along one mile of Sir Francis Drake Boulevard, between Wolfe Grade and Eliseo Drive. As part of the 2020 Upgrade the Drake project, the County and project team reviewed existing conditions along the 2.2-mile stretch of the corridor. Based upon current safety standards, the County determined the guardrail was unnecessary except for a segment between Wolfe Grade and Manor Road where the guardrail will remain in place.

Post and Cable Fencing Upgrades
The existing guardrail along Sir Francis Drake Boulevard has been replaced with a 44-inch tall post and cable fence, with the exception of the segment mentioned above. By removing the guardrail along Sir Francis Drake Boulevard, the County can install new fencing 18-inches away from the curb to provide an additional buffer between motorists and pedestrians/bicyclists.

The new fencing is taller than the guardrail, which will prevent pedestrians and bicyclists – particularly children – from falling into the roadway. Additionally, this improvement allows for wider sidewalks throughout the corridor, making it easier for those walking and biking to travel. A comparable post and cable fencing is located on Camino Alto near Mill Valley Middle School, in the City of Mill Valley. 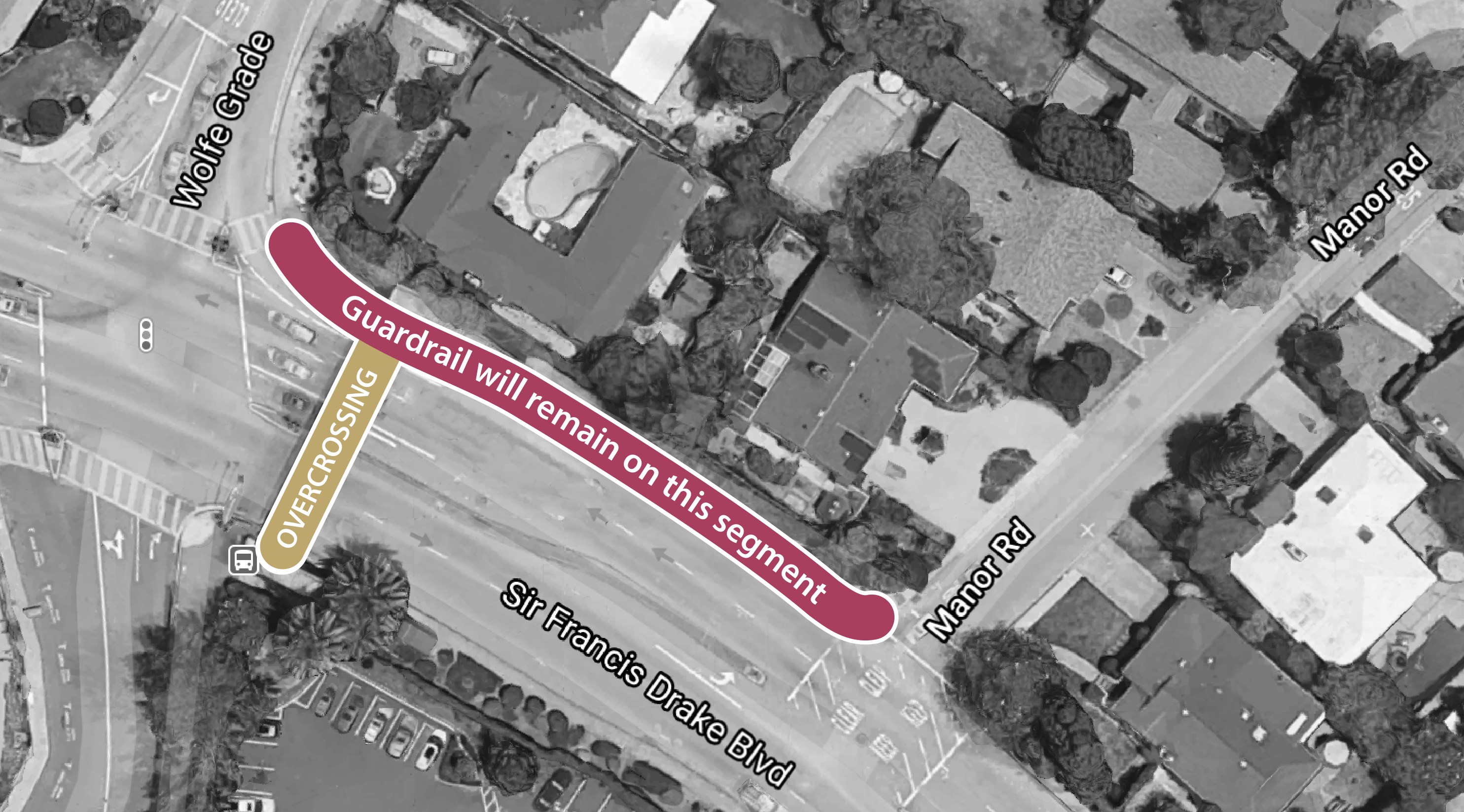 Guardrail Segment Between Wolfe Grade and Manor Road
Guardrails are installed on roadways when there is a large, fixed object that vehicles could potentially hit. The pedestrian overcrossing at this location of Sir Francis Drake Boulevard is an example of a fixed object; the guardrail in front of it protects drivers from running into the overcrossing’s concrete column. Given those facts, the section of guardrail will remain for the following other reasons: the pedestrian overcrossing regularly serves high levels of foot traffic; there is a history of vehicle crashes at this location; there is a curve in the road between Wolfe Grade and Manor Road; and there is a lack of shoulder at the right turn lane onto Wolfe Grade.